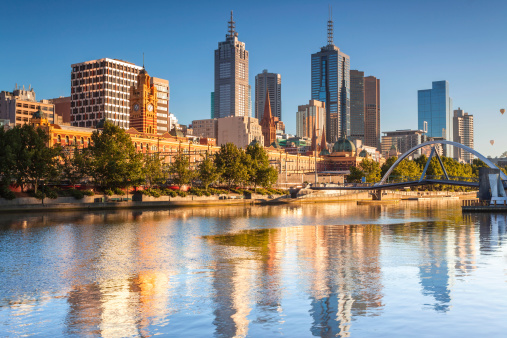 Australiaâ??s Gold Coast has been a popular tourist playground for many years. This area stretches about 45 miles, from Labrador and Southport south to Coolangatta in the southeastern corner of Queensland with a long expanse of beaches and a variety of theme parks. The theme parks offer thrill rides, outback experiences, a chance to mingle with exotic animals and a variety of shows, both on land and in the water. Most of the theme parks are on Oxenford or Coomera along the main M1 Pacific motorway running south from Brisbane to the Gold Coast.

Sea World  at Southport is Australiaâ??s largest marine park, where visitors can swim with the Dolphin, as well as watch whales, sea lions and water skiing performances.

For fauna, visitors can head to David Fleay Wildlife Park at Burleigh Heads or the Currumbin Wildlife Sanctuary.

Gold Coast beaches are beautiful, with wild surf. Swimmers should be aware of the currents and riptides.

There are more than 40 championship and resort golf courses in the region.

Some of the excellent resorts that have been built are the Hyatt Regency Sanctuary Cove, the Couran Cove Resort, Royal Pines Resort, Marriott Surfers Paradise Resort and Spa, the Hotel Conrad and the Palazzo Versace.

There is also a vast choice of smaller hotels and apartments.

The center of activity in the Surfers Paradise suburb is Cavill Avenue, with a vast array of cafes and restaurants.

Shoppers are well catered to on the Gold Coast with a number of Plazas and Malls. Pacific Fair  at Broadbeach is Queenlandâ??s largest mall. Marina Mirage Gold Coast at Main Beach is the Gold Coastâ??s trendiest and most upmarket shopping complex, with lots of designer boutiques.

Whale-watching on the Gold Coast provides a fantastic opportunity to get up close and personal with the largest living mammals on Earth. Whale-watching season runs from June through November.

Other popular events include the Coolagatta Gold Ironman endurance event in October, the street racing of the Nitro Super-GP in October, the Magic Millions Horseracing Carnival in early January and the Australian Ladies Masters Golf in February.